Introducing the Plug and Play Micro-ORC

The Plug and Play Micro-ORC is a 1 kW waste heat recovery system from Air Squared that provides on-site, emission-free, power generation at home or business.

Broomfield, CO — Air Squared is developing a fully integrated micro-organic Rankine cycle (ORC), patent pending, for passive power generation. The Plug and Play Micro-ORC is optimized for tandem operation with prevailing continuous load natural gas generators, such as natural gas-powered combined heat and power gensets. Designed for simple home or business integration, the Plug and Play Micro-ORC is slated to produce 1 kW of electrical power, increase topping cycle efficiency by 10%, cost around $3,000 US, and remain maintenance free over 10,000 hours. The system is intended to leverage the benefits of traditional industrial-scale ORC plants for micro-scale power generation, where 1 kW of emission-free, passive energy can support residential homes and businesses.

The project is funded by the U.S. Department of Energy and Advanced Research Projects Agency-Energy (ARPA-E) as part of the GENSETS program, which seeks to foster distributive energy solutions in the United States by supporting aging centralized power generation and integrating homes and business into the smart grid. The project has now moved into Phase II of development where Air Squared will prototype and test the Plug and Play Micro-ORCE throughout 2018.

A compact and efficient orbiting and novel spinning scroll expander are the primary drivers of the ORC, allowing the entire system to have a footprint of less than one cubic meter. Air Squared has over twenty-five years of design heritage with scroll technology and has designed custom expanders for waste heat recovery systems up to 50 kW. While the proof of concept Plug and Play Micro-ORC is rated for 1 kW, Air Squared expects the system will demonstrate significant size, weight, and power improvements, which will encourage interest for scroll expander engines in scaled waste energy recovery systems.

ORCs are engines that exploit organic fluids with a higher molecular mass but a lower boiling point than traditional steam. The working fluid is pumped through a closed loop to drive an expander that generates continuous load electricity. Waste heat recovery using ORC systems could play an essential role in expanding the renewable energy landscape by providing emissions-free electricity that is unconstrained by location-specific environmental conditions.

In principle, spinning scroll design (also referred to as a “co-rotating scroll”) is very similar to traditional orbiting scroll design, as the relative motion between the two scrolls is identical. Pressure and flow are generated the same in either approach, with the relative motion between scrolls creating a series of crescent-shaped gas pockets that generate pressure, vacuum, or expansion depending on how the device is being operated. 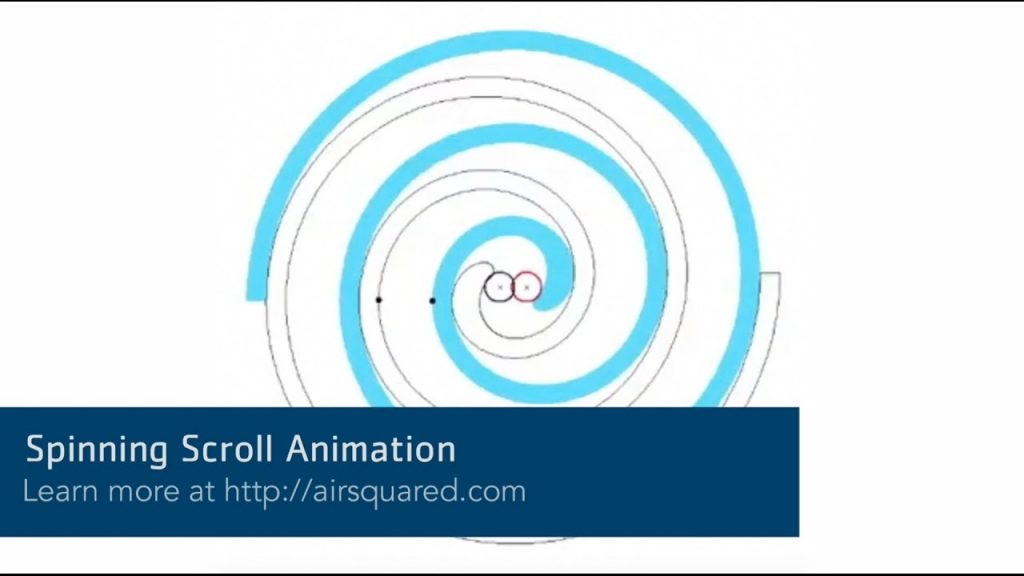 The primary difference is that the traditional approach of one scroll remaining stationary while the other scroll orbits eccentrically on a fixed path is replaced with two scrolls that simply rotate in synchronous motion with offset centers of rotation.

The spinning scroll approach reduces componentry, improves efficiency, and allows for higher running speeds. The true rotary motion of the synchronous scrolls eliminates the need for counterweights, allowing for shorter and lighter drive shafts, which in turn, reduces power consumption, size, and weight. The simplified balancing and a lighter drive configuration also allow for higher obtainable running speeds by a factor of two. As pressure and flow are directly proportional to speed, a spinning scroll design can offer similar performance, with substantial size and weight reduction.

Air Squared is the industry leader in scroll expander design and manufacturing. By introducing a simple design with fewer moving parts, scroll technology has established itself as a highly efficient, very reliable, cost-effective alternative to traditional expanders. With a growing line of custom and commercial expanders, Air Squared makes the may advantages of scroll technology available to OEMs worldwide.

This material is based upon work supported by the ARPA-E GENSETS Program. Any opinions, findings, conclusions, or recommendations expressed in this material are those of the author(s) and do not necessarily reflect those of the U.S. Department of Energy or ARPA-E.