Advanced by Air Squared for Over Thirty Years

Not familiar with oil-free scroll technology? This is the best place to start for a basic understanding of the technology behind Air Squared.

What is scroll technology? It’s the common technology behind scroll-type compressors, vacuum pumps, and expanders. They are generally defined as positive displacement devices having orbital motion and interleaving scrolls used to compress, pump, or expand fluids. Sound complicated? It actually isn’t. In fact, scroll-type devices are often referred to informally as “the elegant solution,” due to their simplistic design and quiet, smooth operation

A scroll compressor, vacuum pump, or expander is a positive displacement device that has orbital motion and interleaving scrolls used to compress, expand, or remove air or other gases.

The scroll concept is actually quite old. The initial patents date back to the early 1900s. Unfortunately, the technology to fabricate scrolls accurately did not exist, and the concept was forgotten.

In 1972 the scroll concept was re-invented by a physicist named Niels Young. Mr. Young brought the idea to Arthur D. Little, Inc. of Cambridge, MA. Arthur D. Little saw its potential and began the development of a feasibility model in January 1973.

Today, scroll compressors are used extensively for refrigeration by many well-known companies, including Trane, Hitachi, and Copeland.

A compact scroll compressor developed by Air Squared operates perfectly on the surface of Mars, helping convert carbon dioxide into oxygen as part of the Mars Oxygen In-Situ Resource Utilization Experiment onboard the Perseverance rover.

Oil-Free Scroll Technology
How it Works 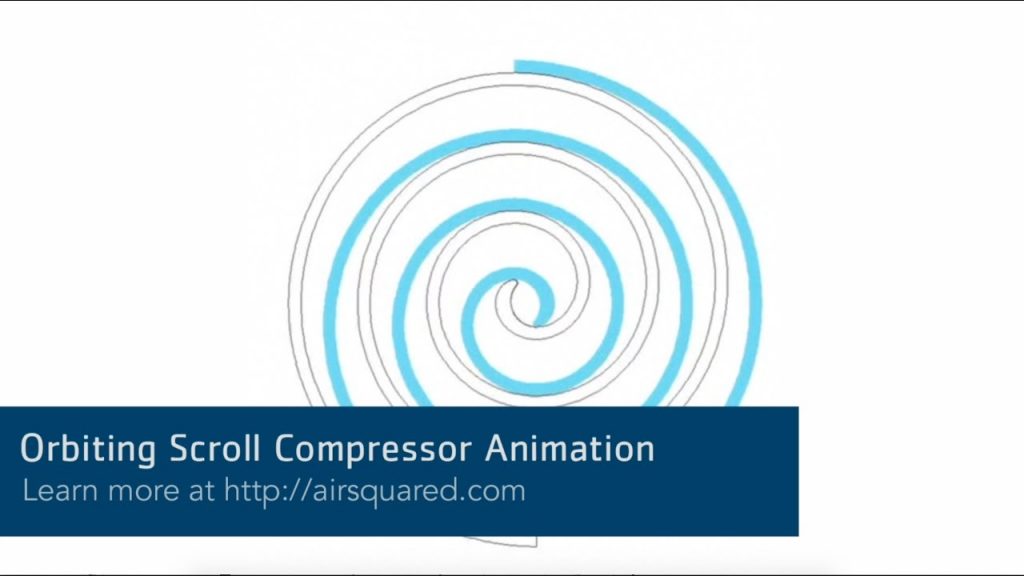 During operation, a series of crescent-shaped pockets are created between the two scrolls. In the case of a scroll compressor, the working fluid moves from the periphery (inlet) towards the center (discharge) through increasingly smaller pockets, generating compression.

Similar principles apply for a scroll vacuum pump and a scroll expander.

Involute geometry is complex, the design itself is not

Informally referred to as “the elegant solution,” standard oil-free scroll designs are simplistic and have few primary moving parts.

The “scroll pack” assembly is the heart of the design and consists of all primary and wearing components.

The “drive” assembly consists of a housing, motor, and crankshaft that drives the scroll pack. Most designs will also include a mounted fan for air cooling during operation.

The ratio of inlet (suction) volume to the discharge volume