Air Squared uses NIST-calibrated equipment for all testing practices. For open-loop (air) testing, the test bench is assembled as shown in Figure 1. Arrows represent the flow of gas through the system, starting at the discharge of the compressor. For closed-loop testing with gases other than air, contact Air Squared to discuss test bench requirements.

Required materials for a scroll compressor test stand are: 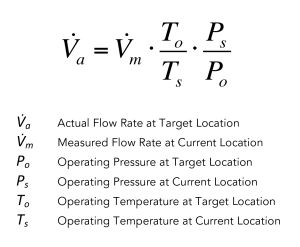 There is generally a pressure drop across the flow meter, so it is placed downstream from the pressure control valve. To account for this, any flow rate, measured as a discharge flow rate, is corrected using the actual inlet temperature and pressure. See the equation shown in Figure 3.

Motor power consumption is measured using a multimeter (voltage) and an amp meter (current) as close to the motor as possible. With brushless DC motors (BLDC), it is best measured at the appropriate motor leads between the controller and the motor.

Speed is measured either manually using a tachometer directly on the motor shaft or an available bearing, or electronically using an RPM gauge that counts the motor pulses.

Compression is an exothermic process, with excess heat managed using a cooling fan (or liquid cooling) to force convection. Air Squared always recommends the use of additional cooling when available.

Air Squared is located in Broomfield, CO – 1,640 meters (5,380 feet) above sea level. The atmospheric pressure at this altitude is approximately 0.835 bara (12.1 psia). All Air Squared air compressors are tested at this altitude, so the atmospheric pressure differential between Broomfield, CO, and sea level should be considered.

For compressors at a given pressure and speed, the lower air density in Broomfield, CO, can result in lower power consumption and a lower flow rate than testing at sea level.