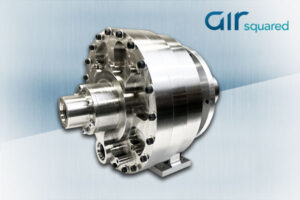 To satisfy environmental safety requirements associated with the use of R245fa, R134a, and other refrigerants, the spinning scroll prototype is semi-hermetic, oil lubricated, and has no dynamic sealing. By incorporating a patented magnetic coupling configuration that is unique to Air Squared, the generator is isolated from the working fluid, providing all-static sealing while also allowing for flexible connection to any output.

In principle, spinning scroll design (also referred to as a “co-rotating scroll”) is very similar to traditional orbiting scroll design, as the relative motion between the two scrolls is identical. Pressure and flow is generated the same in either approach, with the relative motion between scrolls creating a series of crescent-shaped gas pockets that generate pressure, vacuum, or expansion depending on how the device is being operated. The primary difference, is that the traditional approach of one scroll remaining stationary while the other scroll orbits eccentrically on a fixed path, is replaced with two scrolls that simply rotate in synchronous motion with offset centers of rotation.

The spinning scroll approach reduces componentry, improves efficiency, and allows for higher running speeds. The true rotary motion of the synchronous scrolls eliminates the need for counterweights, allowing for shorter and lighter drive shafts, which in turn, reduces power consumption, size, and weight. The simplified balancing and a lighter drive configuration also allows for higher obtainable running speeds by a factor of two. As pressure and flow are directly proportional to speed, a spinning scroll design can offer similar performance, with substantial size and weight reduction.

UPDATE (March 24th, 2017) – As part of the ongoing ARPA-E GENSET project, Air Squared will continue development of spinning scroll technology. A next generation expander similar to the E15H037B-SH-SS-SPN will be tested by Q4 2017.